There are more than 9,000 licensed restaurants in Minnesota. This month Mpls/StPaul magazine lists 50 as its “best” choices. That leaves more than 8950 restaurants that were not mentioned and some of them are my favorites.

I have favorites for a variety for reasons, but Murray’s has been on my “best” list for more than 57 years. It has been around even longer. Opened in 1933 in North Minneapolis, the Red Feather was the first restaurant run by Art Murray and his wife Marie. In 1939, they moved it to the Russell Hotel on 4th Street in downtown Minneapolis then in 1946 to 6th street off Nicollet Avenue and called it Murray’s Steakhouse. Here they took over a space once occupied by the Chinese restaurant Hankow Café that touted itself as the “finest and largest Oriental café in the Northwest.” That was interesting because it was just two doors down from John’s Place, the first and one of the most popular Chinese restaurants in the state.

Murray’s soon became a favorite of businessmen, visiting notables, sports legends, judges and lawyers for lunch and at night a place to eat, drink and dance to the music of the Murray’s Orchestra. In the 1950s it was a favorite afternoon luncheon choice for ladies who were also treated to fashion shows while dining. It was a time when ladies wore fussy hats and kid gloves anytime they went downtown.

I started going to Murray’s in 1960 when I was working in advertising and taking clients to lunch. Marie understood the difficulties of a woman working in a man’s world especially when the check came to the table. To eliminate the awkward situation when most men felt obliged to pick up the check, Marie opened a house account for me so I never had to deal with a check at the table again.  It was simply added to my account along with a decent tip and I paid the bill at the end of the month.

Over the years Murray’s won numerous dining awards including the Silver Butter Knife award for its outstanding steak. In the 1980s it was named as the source of America’s most perfectly cooked steaks. When I moved to New York in 1974 friends would take me to a variety of steakhouses and each one was simply not as good a Murray’s. Not the Palm. Not Peter Luger’s. Not a single one! And while my husband (a native New Yorker) publicly tolerated my allegiance to Murray’s quality, he privately agreed it was the best.

So what makes Murray’s so good? Quality food, outstanding cooking, consistent, friendly management, and an atmosphere of caring about customers. But most of all it is the delicious food year after year. Among my favorites are small steaks, au gratin potatoes, Caeser salad with house dressing, fresh raspberry pie, and, of course, Murray’s garlic toast. So many of the recipes date back decades and are still secret. If you are not a particular Murray, you do not get to see the recipe, and believe me I have tried.

Gone are the Murray’s Orchestra and the dance floor in the center of the dining room. Gone are Art and Marie and later their son Pat. Gone are the fashion show luncheons. But still here, still thriving, still serving some of the best food in the country are third generation Murrays who truly understand what “best” means in the restaurant business.  Thanks Tim, Jill and James Murray for continuing a tradition your grandparents and father so successfully carried on. We need restaurants like Murray’s to remind us what exceptional dining is all about. 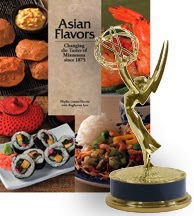 Read more about Asian food in Minnesota and try more than 160 recipes in Asian Flavors: Changing the Tastes of Minnesota since 1875, in bookstores and on amazon.cm.

Watch the EMMY® award winning “Asian Flavors” television show based on the book on tpt MN. Check local TV listings for broadcast times or view the show streaming online at: